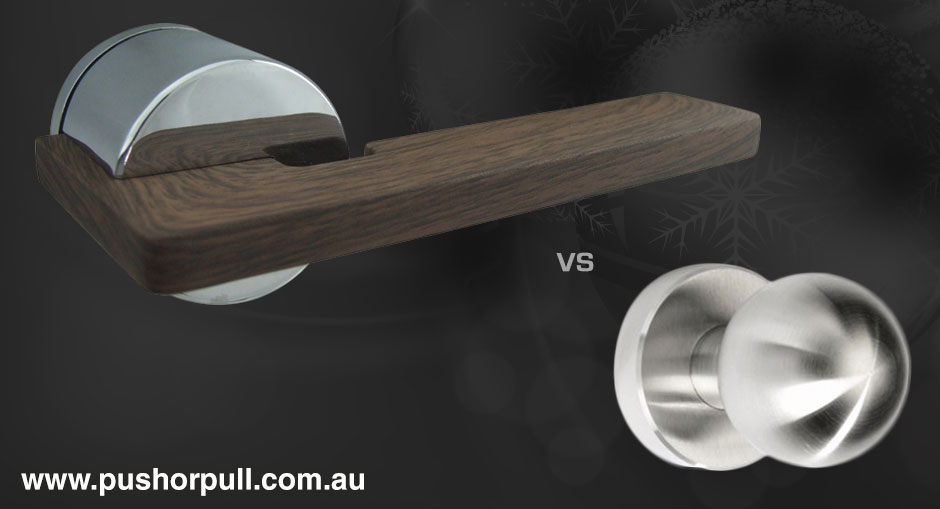 A door handle can be defined as a mechanism or an object that is used to operate a door manually. The term door lever handles typically refers to a door latch device that is either fixed or operated by a lever. The mechanisms present on car doors are typically of this type. On the other hand, door knobs generally refer to an operating mechanism that is round in shape.

What is the Backset?

Which is Better: Door Lever Handles or Knobs?

The lever style door handles are more commonly used in the European countries. On the other hand, the knob style is preferred in Australia as well as the US. While the knob style might be more popular, the fact remains that door knobs tend to be a bit problematic for the elderly and the young when it comes to operating them.

That is why you will find that the lever style of handles is more commonly used in industrial and commercial buildings even in Australia instead of the knob style. The main difference is that the lever style doors do not need a tight grip in order to be operated unlike door knobs. Moreover, levers tend to be a better choice on doors that have narrower stile widths.

The Types of Handles Used in Households: Quite a few types of door handles are used in Australia and elsewhere. Some of the more common ones are given below.

Entrance Door Handles: As the name suggests, these handles are generally used on the doors that leads to the exterior of the building. They contain keyed cylinders.

Privacy Door Handles: These are generally found in the doors that lead to bathrooms or bedrooms. While they can be locked, they can also be unlocked with a generic tool. Moreover, they do not contain keyed cylinders.

Passage Door Handles: These door handles do not lock and are typically used in closet or hall doors.

If it is a seamless aesthetic you want to attain for your architecture or interior design project, you have to look into all details. More than the door, it is crucial to choose the designer door handles that will make it look perfect. The door handle can make or break the overall appeal of the interior. It's like a missing puzzle... read more

The architecture of Australia is one of the most diverse in the world. While Australian colonial architecture can be said to begin with the initial European settlement at Sydney Cove in 1788, it was from the early 19th century that substantial buildings were erected using more sophisticated architectural styles, such as the Gothic Revival and neoclassical. 1900s The introduction of the likes... read more

We are online now, if you need any assistance, please call us now on

In a hurry? or Not found what you are looking for?

Let us help you find the right hardware for your doors!